Ron Costin, Foss senior tankbarge manager based in Long Beach, has been awarded the 2017 Michael D. Garvey Award for Distinguished Service in Safety.

A 28-year veteran of Foss, Costin was cited for setting the company standards in tankbarge management by authoring the company’s Tank Barge Operations Manual. 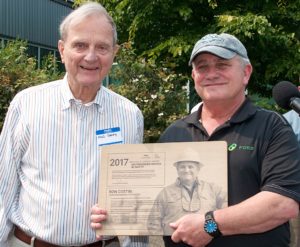 “Ron also has been an ambassador for our key push to zero incidents initiatives, which include incident reporting and investigations, near misses, behavioral based safety change management and job safety analysis processes,” wrote Foss General Manager John Marcantonio and Vice President of Marine Operations and Assurance Igor Loch in nominating Costin for the award.

Costin’s team of 28 crewmembers mans four tank vessels, as well as the logistics, operations support, and customer service departments in their division.

The Southern California team pioneered the installation and operation of both red dye injection systems for its gas oil systems, and onboard vapor processing units, which substantially reduce vapor pollution emissions during the loading process.

Michael D. Garvey, for whom the award is named, is one of the founders of Foss parent company Saltchuk, a retired chairman of the company, and a former principal shareholder.