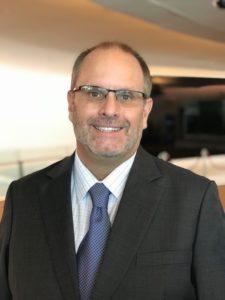 Johnson joins CITB after 16 years with ARCO and BP Shipping. Most recently Johnson served as Director and General Manager of BP Maritime Services. He was based in Singapore with accountability to provide crewing and maritime talent needs for BP Shipping and BP Group globally.

“We conducted an extensive search to find an established and renowned industry leader, a person that will continue the growth trajectory at Cook Inlet Tug & Barge,” said John Parrott, President and CEO of Foss Maritime. “Jeff’s impressive background, coupled with his strong desire to return to Alaska, made him the perfect choice to lead CITB in serving our customers and communities around the state.”

Johnson began his career at sea in the fishing industry of Alaska. After a period with ARCO Marine’s tanker fleet and Polar Tankers, he transitioned ashore with ConocoPhillips in 2003 as a marine superintendent before becoming the fleet operations manager accountable for international and U.S.-flagged tanker fleets as well as the company’s U.S. inland tug and barge fleet.

“I am very excited to join Cook Inlet Tug & Barge and be a member of this incredible team,” said Johnson. “I’ve always been impressed with the people at Cook Inlet and their unique ability to operate year-round in the harsh environment of Alaska.”

Johnson joined BP in 2007 in Alaska as the BP Shipping marine affairs advisor acting as the local face to external parties before moving to Houston in 2010 as the assurance capability manager for BP Shipping. In this role he served as the interface to BP’s upstream in the Americas, and led the provision of technical support to the Alaska Tanker Company before becoming manager, environmental and external affairs for BP Shipping in 2012.

In 2014, Johnson was appointed to lead BP Shipping’s presence in the U.S. as President, BP Shipping (USA), also taking the lead in interfacing with federal and state legislative and regulatory entities. In his role as Director and General Manager, BP Maritime Services based in Singapore, Johnson led the provision of crewing and maritime talent for BP Shipping and the BP Group since 2017.

“Foss and CITB have been in the process of expanding our fleet,” said Parrott. “With the addition of assets along the North Slope, and the relocation of vessels to the area, we are committed to continuing to expand our service offering throughout the region. Jeff’s ability to manage every aspect of projects, to interface with regulatory groups, and to identify talent and opportunities makes him the ideal person to lead our ongoing investment in Alaska.”

Johnson was a committed responder during the deep water horizon incident in 2010 and has been an active member of the mutual response team (MRT) supporting BP Group needs globally. He has been a passionate proponent for diversity and inclusion and has driven forward BP Shipping’s ‘believe in zero’ approach to safety.

“Opportunities in Alaska abound for Cook Inlet Tug & Barge because of the people and the experience the team brings to the table,” said Johnson. “The equipment CITB brings to the table coupled with its unique capability of operating in Alaska makes CITB an exciting place to come with a bright future.”

Johnson previously served on the Board of Directors for the Marine Preservation Association (MPA) and the Chamber of Shipping of America, and has been an active member on the Western States Petroleum Association Marine Committee and BP Board member alternate for the Alaska Tanker Company.

He holds a USCG Masters license, a BS Degree in Business Administration from Northern Arizona University in Flagstaff, and a BS Degree in Marine Transportation from the California Maritime Academy in Vallejo. In addition, Johnson completed coursework at the Sloan School of Executive Management at MIT in Cambridge, Mass.