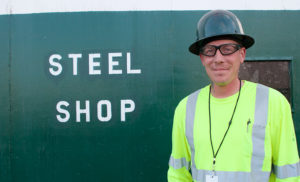 In nominating Biertzer for the award, Foss naval architect Amanda Dayton called him “an exceptional manager and producer at the shipyard.” She continued:

“He stepped into the superintendent role for the Long Beach fireboat project and brought significant leadership and organization to the crews. He did his best to manage the customer when the project manager was absent or during management transition. He utilized his team effectively and worked with integrity.”

Biertzer is a nine-year veteran of Foss, having joined the shipyard team as a shipfitter in 2009.

“My reaction to receiving the award was, if you put forth hard effort it is noticed.”Biertzer said. “I was pretty impressed actually.”

Biertzer, who has a farm in Eatonville near Mount Rainier, said he and his wife spent the money upgrading fences for their cattle and for a new, large chicken coup.