Capt. Dominguez was a fixture in the L.A. and Long Beach Harbors 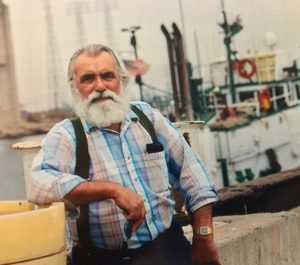 Capt. René H. Dominguez, a long time fixture in the Los Angeles and Long Beach harbors, died suddenly at home on August 9. He was 83 years old.

Dominguez operated tugs in the harbor starting in the late 1950s, and ran Foss boats for the last 24 years of his career, retiring in 2002. He loved the waterfront and has photodocumented changes in both harbors since the 1950s.

He was well respected not only for his towboating abilities, but for his unique sense of humor, and for playing Santa Claus every year for friends and family. An avid backyard gardener, Dominguez enjoyed teaching his grandchildren that fruits and vegetables didn’t just come from the grocery store.

Every year he led what he called his “pilgrimage” to the Gilroy Garlic Festival in Northern California, bringing garlic braids back to all who couldn’t make it. He enjoyed traveling and discovering new places. He once said some of his best trips were when he was lost.

He was preceded in death by his son, René II, and is survived by three daughters, Lisa, Audra and Erica, numerous grandchildren, and many friends.