The day before Michele Seaver’s sudden passing on April 26, she joyfully assisted in the birth of a healthy Palomino filly on her farm in Mount Vernon, Washington.

“More often than not, in the spring, whenever we would invite her somewhere, she would say, ‘I can’t go – it’s foaling season,’” said Michele’s sister Denise Tabbutt. “It became know as one of many ‘Micheleisms.’” 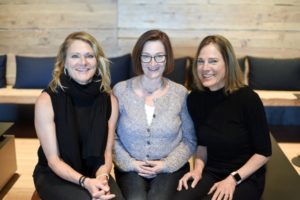 “She loved animals since day one.”

Michele was born on July 24, 1962, and grew up in rural Bellevue alongside Denise and Nicole. Michele was the eldest.

“She always had dreams – she was like her dad in that way,” said Michele’s mother, Lynn Garvey. “And there were animals everywhere, always. She started small: dogs, cats, hamsters, rabbits, a bird, a pig – then horses. All of a sudden, there was a barn erected in front of our kitchen window.”

“She convinced our dad to build her a barn,” said Nicole, laughing. “She wasn’t the typical eldest sibling, at least not when we were kids. She was very independent.”

The Garvey house sat adjacent to Bridle Trails State Park, known for its extensive network of horse trails. Michele and Nicole both rode and showed horses. Michele graduated from Forest Ridge School of the Sacred Heart in 1981.

“One of my favorite memories of growing up with Michele was waking up at 4 a.m. to braid our horses for a show, eating from a box of doughnuts,” Nicole continued. “Being with Michele always made me feel…safe.”

“She was a mystery to me,” said Denise. “She would have these huge dreams, and over and over again I would think, ‘how are you going to get that done? How are you going to do it?’ But she surprised us time and time again. The last few years, I’ve been thinking, ‘Michele, you made it. You’re exactly where you wanted to be.’” 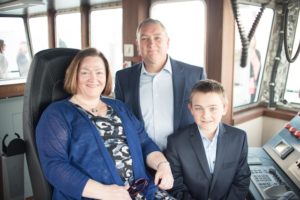 Michele Seaver tries out the captain’s chair in the pilothouse of her namesake tug at its christening in 2015. With her are husband, Rick, and son Aiden.

“The last few times I talked to her, I was able to say, ‘Michele, you are such an inspiration to me,’ said Nicole. “She would always reply, ‘I love you, sis.’”

Michele was nothing if not 100-percent committed to anything and everything she wanted to accomplish, according to her family. No matter how improbable it seemed.

“She would tell us her plans, and we’d have our reservations,” said Denise. “But she surprised us again and again. She figured out a plan and she got there. I think it was really the prevailing theme of her life.”

Michele’s first big dream – aside from her childhood love of horses – was to run her own business. She took up baking, and started a bakery and then a restaurant.

“From hiring and training employees, planning menus, waking up at 2 a.m. to start baking – she did it all,” said Denise in her remarks made at Michele’s private service on May 12. “The customers came and her food was awesome.”

But Michele’s biggest dream was still on the horizon. In 2000, she married Rick Seaver, and the couple had a son, Aiden, in 2004. Soon after, the family purchased the farm outside of Mount Vernon. Red Wagon Farm allowed Michele to begin breeding, training and eventually selling Dutch Warmbloods.

“Michele didn’t want to own a few horses,” Denise continued. “She wanted a full-on breeding and training operation. She researched, built connections in the dressage community, flew to Holland and made connections there, designed a barn and arena…she worked her butt off. We joked early on that she couldn’t call it a business if she had no revenue, only expenses. She surprised us again. She wasn’t just successful – she was pioneering. We found out after she died that there’s debate over whether one of her horses is the first- or second-best Dutch Warmblood in the country.”

And it wasn’t just her dreams Michele gave her all to – she threw herself into overcoming unexpected challenges as well. Five years ago, she learned she was pre-diabetic and chose lifestyle changes instead of medication.

“She worked hard at strength training, yoga religiously three days a week and changed her lifestyle,” Denise said. “After two years, she was not diabetic. Her doctor used her as a poster child for other patients.”

Denise and Nicole remember Michele as being healthier and happier than she’d ever been in her adult life, and all her ‘Micheleisms’ – grinding her own flour, her obsession with essential oils, her Amazon shopping habit – now inspire a sense of gratitude in the family she left too soon.

“When Michele decided to pursue something, whether it was in her personal or professional life, she was in 100 percent, no matter the challenges before her,” said Tim Engle,president of Saltchuk and Michele’s brother-in-law. “Yet this determination was coupled with grace and empathy for those around her, and she somehow always managed to accomplish her goals with a winning smile and infectious laugh. She gave that smile to her son Aiden who will hopefully carry it forward.”

The Garvey sisters first began working in the family business in their early 20s.     Denise and Nicole gradually deepened their involvement, while Michele stayed in the background. Running a family business is difficult in today’s corporate climate, but the family was committed to their success, going back to school together to study family-owned businesses specifically, hiring a family business advisor, and instituting quarterly family meetings.

“Denise and Nicole got involved in Saltchuk right away, but Michele’s capabilities…everyone became aware of them later,” explained Michele’s mother, Lynn Garvey. “My father was a small business owner, so I grew up with all the ups and downs of taking risks in business. Michele’s dad was involved in many different business ventures before TOTE, and he always said that you learn more from your mistakes than your successes. Michele was also fearless in that respect.”

“Michele had her father’s business savvy,” echoed Mark Tabbutt, Saltchuk chairman and another of Michele’s brothers-in-law. “She was very comfortable embracing risk. She was a huge supporter, with her trust being such a big factor in allowing us to make many large bets since she became a significant owner.”

Because Michele and her husband Rick were less involved in the company’s day-to-day operations, explained Denise, they played the perfect balancing role.

“Michele was extremely smart, able to sit back identify the important, big-picture things,” she said. “She drove the family office. She wanted to make sure the next generation had a path to be together in partnership. She cared deeply about our employees being taken care of and given opportunities for advancement. She valued leadership and a strong succession plan.”

John Stoddard,who worked for Michele in the family office, said that sandwiched between the laughs and good times was “example after example of what really made Michele special: compassion, empathy, wisdom, optimism, practicality, and a work ethic that raised the bar for all of us. She worked tirelessly to leave her world, our world, in better shape than it was when she arrived. Michele leaves behind a legacy anyone would be proud of.”

In an unintended poignant tribute, Michele’s namesake tug, the Michele Foss,returned to Bellingham Harbor after years at sea around the world on the morning of her death.

“Michele was the glue in our family,” Denise concluded. “She was the glue that kept the six of us together in our ownership role at Saltchuk and our family office. Michele, Nicole and I were a great team – ‘Sister-Power,’ she always used to say. We complemented each other’s strengths and weaknesses. We had a common purpose which drew us closer together. We will miss her every day.”

In remembrance of Michele Seaver, her family welcomes donations to Skagit Animals in Need (SAIN).