Foss at 130: Homegrown Company is a World Leader in the Tug-Barge Industry

The Foss boathouse in Tacoma as it appeared in 1918.

When Norwegian immigrant Thea Foss started renting rowboats from herfloating home in Tacoma in 1889, she hardly could have imagined that her small business venture would grow into one of the world’s leading tug-barge operations.

From its humble roots, Foss Maritime has grown into an industry leader with harbor services operations on the east and west coasts of the United States and in Alaska and Hawaii. Foss also tows cargo all over the world and performs project work in some of the planet’s harshest environments.

Celebrating its 130thanniversary this year, Foss has built and continues to build its business through an emphasis on safety and a high level of service to customers, in keeping with its motto, “Always Safe, Always Ready.” 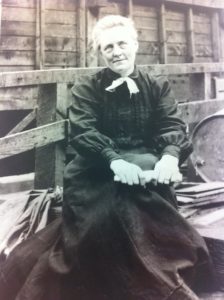 “Foss and its family of maritime companies truly works tirelessly to meet the safety and operational requirements of our customers,” said John Parrott, president and CEO. “We also are constantly looking ahead to ensure our relevance within the industry for the next century.”

Thea Foss was certainly looking ahead when she bought her first rowboat for $5 from a neighbor and painted it green and white, still the Foss colors. She then bought another, at a profit, and before long she had parlayed her original investment into a fleet of rowboats. Her carpenter husband Andrew built more, and after a year, the business was flourishing.

They soon began purchasing and building motor launches to deliver stores to ships anchored in the Tacoma harbor and to carry crewmembers to and from shore. And in 1916, Foss purchased its first tug, a five-year-old 37-footer which it renamed the Foss 9. The company continuously added to the fleet, and in less than a decade was poised to become the leading tugboat operator on Puget Sound.

The company also operated its own shipyard in Tacoma (later moved to Seattle) in which it built five tugs between 1927 and 1931.

The Depression, World War II and the Post-War Era

With a steady book of business, Foss survived the depression and five of its tugs supported naval construction projects in the South Pacific During World War II. One of those tugs, the Justine Foss, met with tragic consequences when the Japanese invaded Wake Island. The captain and mate were executed and Drew Foss, son of the founders, was taken prisoner and served out the war in a prison camp in Japan.

Meanwhile, Foss was involved in numerous interesting projects at home, including laying the world’s longest unspliced submarine power cable across Puget Sound. The company’s activities in Alaska also were growing, and in 1941 Foss became the first company to provide Bering Sea ports with bulk petroleum service by barge.

No class of tugs contributed more to the company’s success in the post-war era than the Miki-class vessels built for U.S. Army service. Foss purchased four of the high-horsepower tugs shortly after the war and five in the 1950s, and they became the backbone of the company’s ocean fleet.

Foss also had expanded its fleet with its entry into the Southern California market with the purchase of Pacific Towboat and Salvage Co., better known as PacTow, in 1949. Fleet expansion accelerated in the 1960s with a continued buildup of Pacific Northwest Harbor Services, regional towing and ocean work. During that decade, 41 tugs, no less than 23 of them new, entered Foss service.

The Foss Family Sells the Company

In the late 1960s, it became apparent that the company soon would not have enough family members to perpetuate itself. Consequently, in 1969, Henry Foss, the youngest son of Thea and Andrew, and the heirs of their other sons Arthur and Wedell, decided to sell the company to the Dillingham Corporation of Honolulu, a well-respected and successful transportation and construction company.

The 1ate 1960s and 70s saw the addition of 14 new tugs and five used tugs to the Foss Fleet, including a number of vessels built by the McDermott Shipyard group in Louisiana that are still in service today.

But tumultuous times were to follow in the 1980s for Foss, which not only faced a downturn in business but also experienced the leveraged buyout of its parent company, Dillingham, by an investment-banking firm that proceeded to dismantle Dillingham by selling off its operating units. Foss, like other Dillingham companies, was required to maximize cash and minimize capital spending.

In the summer of 1987, Foss was sold to the Seattle-based investment group, Totem Resources, which since has been renamed Saltchuk and still owns Foss today. The sale to a company that eventually would become one of the nation’s largest transportation conglomerates turned out to be a highly positive development for Foss. Totem had the resources to support Foss’ growth and the desire to let Foss operate as a stand-alone company.

During Foss’ 130-year history of innovation, never has there been a more important technological development than the company’s introduction of cycloidal propulsion tractor tugs in the 1980s, the first of their kind on North America. Six of them were built at Tacoma Boatbuilding, and all are still in service today.

Technological advances continued in the 1990s with the christening of two specialized Foss-owned barges designed for lightering ore concentrates at the Red Dog Mine in Northern Alaska, which Foss still undertakes every summer when the ice clears.

Another highlight was the addition to the Foss fleet of two enhanced tractor tugs. At 155 feet in length and packing 8,000 horsepower, the tugs were the largest and most powerful tractor tugs in the world and are still dedicated to tanker escorts and assists on Northern Puget Sound.

Those tugs were designed by an in-house Foss team with assistance from Glosten marine architects, which also assisted Foss in the design of the Delta Mariner, a 310-foot ship Foss continues to use to carry Delta IV rockets downriver from their manufacturing site in Decatur, Ala., to launch sites in Cape Canaveral, Fla., and Vandenberg Air Force Base, Calif. 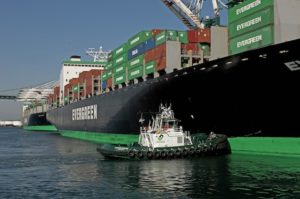 The Carolyn Dorothy was the world’s first hybrid-powered tug.

In 2003, Foss reached another milestone with the launch of the Dolphin-class tug construction program at its Rainier Shipyard in Oregon. The yard built 10 of the high-powered, 78-foot harbor tugs, designed to assist big ships in tight waterways. The last of those, the Carolyn Dorothy, was launched in 2009 and was the world’s first hybrid-powered tug, with high fuel efficiency and low emissions. A second dolphin, the Campbell Foss, was subsequently converted to hybrid power.

The Rainier yard also successfully completed several new construction projects for third parties, including building a Washington State Ferry for Columbia River service. Between 2013 and 2017, three Arctic Class, 132-foot ocean-going tugs were built at the yard and added to the Foss fleet.

Also notable during the first two decades of this century, Foss completed five major sealifts for ExxonMobil to oil developments on Sakhalin Island in the Arctic off Russia’s east coat, the most recent in 2017. For its 2017 work, Foss received a commemorative medallion from ExxonMobil for its performance.

Meanwhile, all five of Saltchuk’s tug barge holdings were combined under the Foss banner in 2013. They are Foss Maritime, AMNAV, Young Brothers and Hawaiian Tug & Barge in Hawaii and Anchorage-based Cook Inlet Tug and Barge. That combination gave Foss the distinction of having the nation’s largest coastal tug and barge fleet.

The fleet continues to grow. Foss recently signed a contract with Nichols Brothers Boat Builders in Freeland, Wash., for construction of four harbor tugs with an option for six more. And Young Brothers, by press time, is expected to have taken delivery of the last of four new ocean-going tugs built by Louisiana-based Conrad Shipyard.

And under Parrott’s presidency, the company has been reorganized, placing an increased emphasis on regional offices and with managers who have strong leadership skills.

The new structure, according to Parrott, “Puts us in a much stronger position to meet our commitments . . . (and) is making us more nimble and responsive to customer needs in each of the markets we serve.”

Parrott likes emphasizing the importance of the talents and experience of the company’s employees, while not minimizing the high quality of its fleet, shipyard and other physical assets.

“Not one of those tugs leaves the dock, nor does anything happen in our shipyard without the support and staffing of the great employees that are the heart of our company,” he said.